The key takeaway you should have from everything we’re about to get into is that the move to the Accountless Internet enabled by your Crypto Wallet means a completely different architecture for the applications you use. In a nutshell many of the elements that reside within an app and away from the user account will move from the app to the account. Most apps you deal with today perform some of useful service. To access this useful service you have an account that is effectively your identity within the app, but in this case the app houses your identity. In addition the app houses all the information created through your usage of the service. As a result it houses all the value created alongside those. In this sense apps are ‘accountful’, meaning the app houses, and in effect owns, your account and the information tied to it. But there’s nothing unique about this right? Everything is built this way. In a sense we’re kind of like the fish who don’t realize they’re in water. While it may seem grandiose to define a new term, in this case the term ‘accountful’ is something I hope will have the effect of leading you to ask ‘what the hell is water?’ We’re so used to accountful apps its almost impossible to notice they are a thing, or that there could be a different way. To make sense of an app being accountless, we needed to think of an app being accountful. In the Accountless paradigm the app is stripped down to the service, and everything else moves into the user account. Now those elements that live in the account become accessible by every app at the command of the user, and not the app they had used. In the accountless paradigm your meta-account is home to all of your value and your information. Or, at least the information and value you want tied to that single account, and by extension, to that identity. 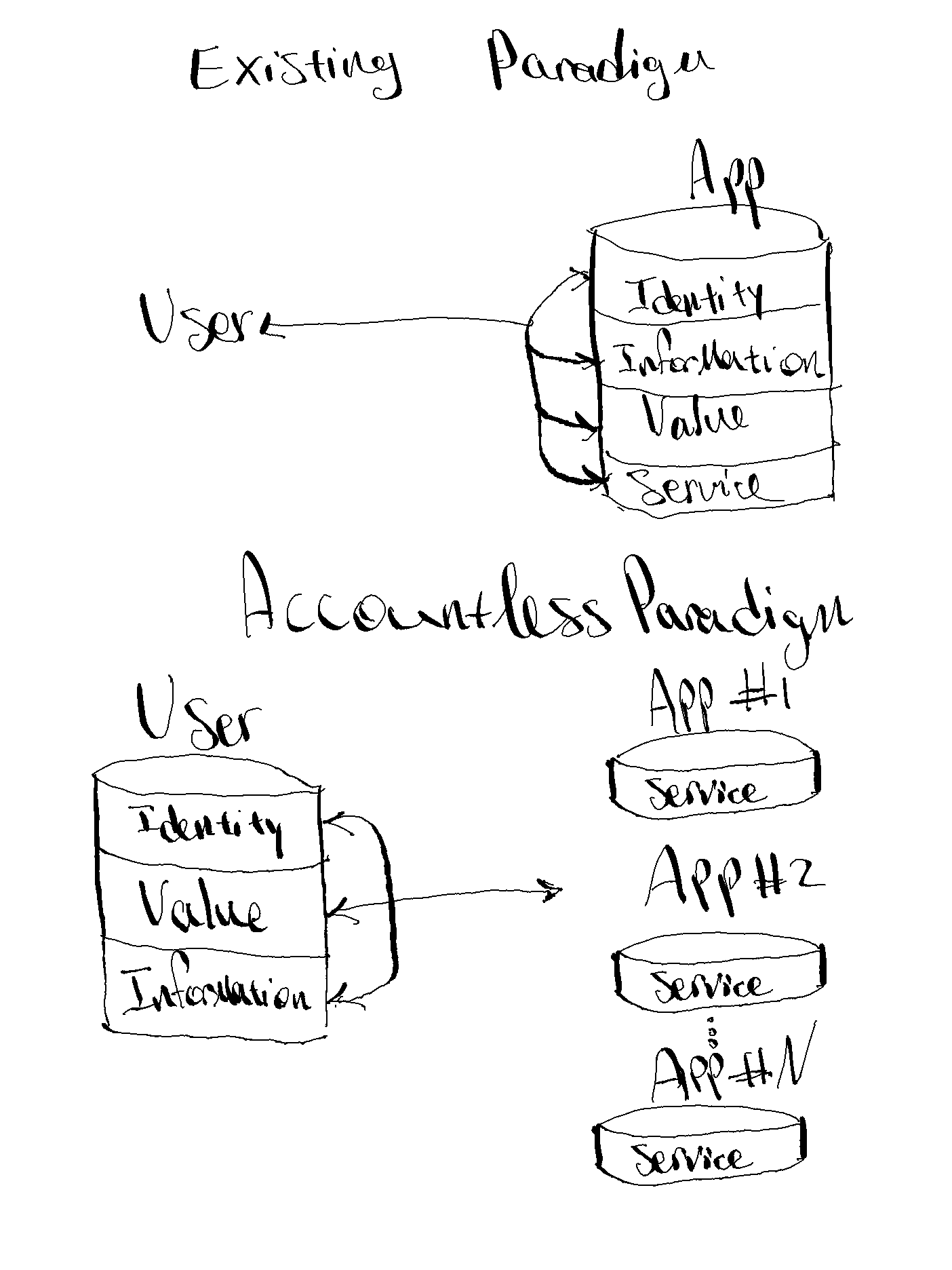 How would these differences manifest in practice? Let’s take a look at how brokerage or trading would work, a case that relates to the ‘value’ side of things. In the current paradigm where accountful apps reign, you have an account with your brokerage, say Robinhood. That account defines your identity to them, it is a distinct account for this service. The assets, whether available cash or anything else, are held by the brokerage. Once you’re logged in, you tell Robinhood what you want to do, say use Cash to Buy XYZ. The action is performed, and now Robinhood holds more XYZ and less Cash on your behalf. You log out, the assets stay there. In the accountless internet paradigm enabled by your crypto wallet you have one account also known as a wallet, your assets, whether available cash or anything else live there. When you go to the service provider, let’s say Uniswap, you just connect your wallet, and now you’re in. You tell the app what you want to do, let’s say use Cash to Buy XYZ. The app asks for permission to use your cash. You grant it. The app then asks you again for the exact action you want to take. You confirm, and then it’s done. You now have less cash, and more XYZ. The assets are still in your account, they never left. You finish your interaction, you close the app, and the assets? They’re still in your account ready for the next time you’ll connect your wallet to another app. Regardless of which app it is. 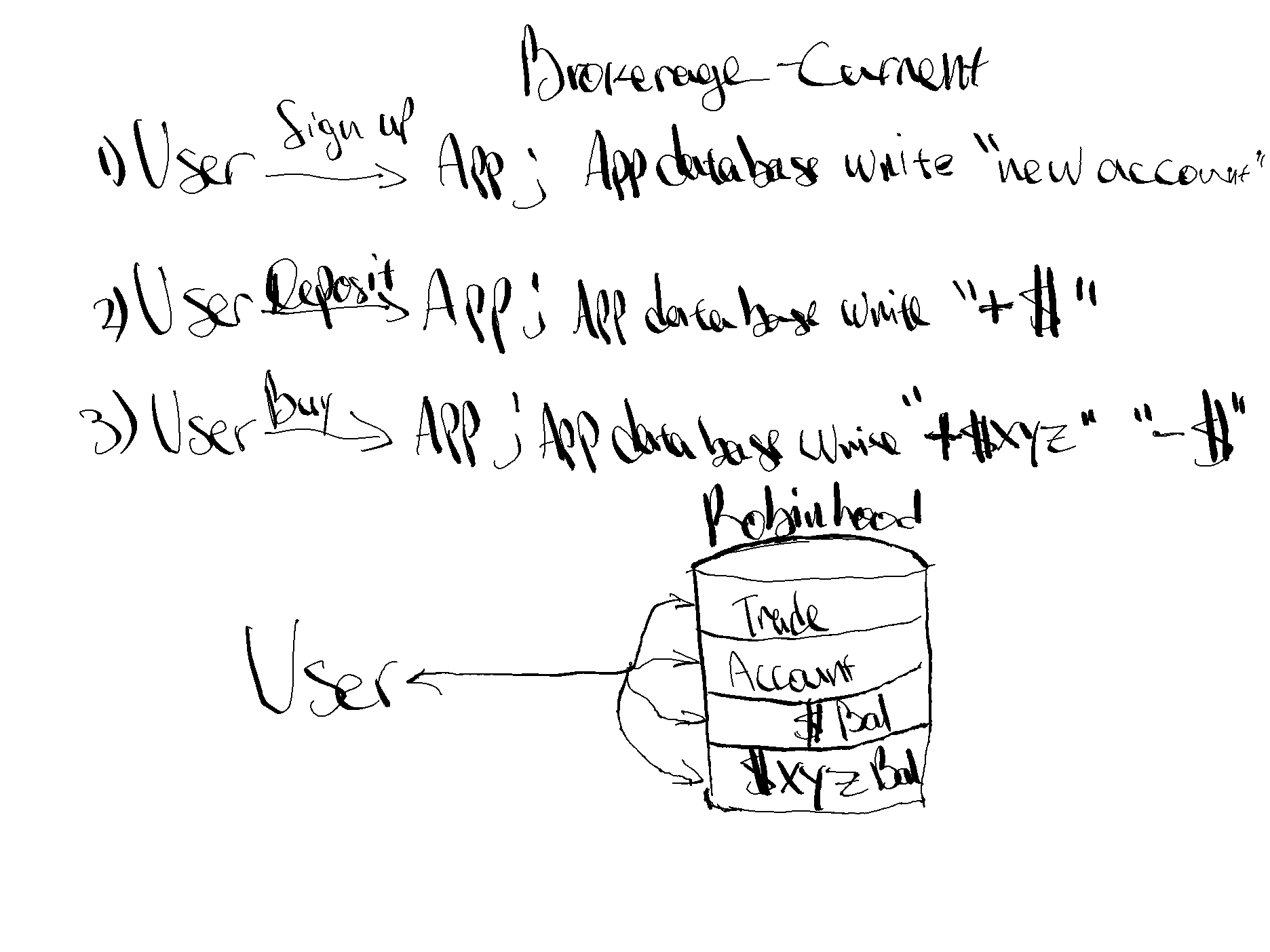 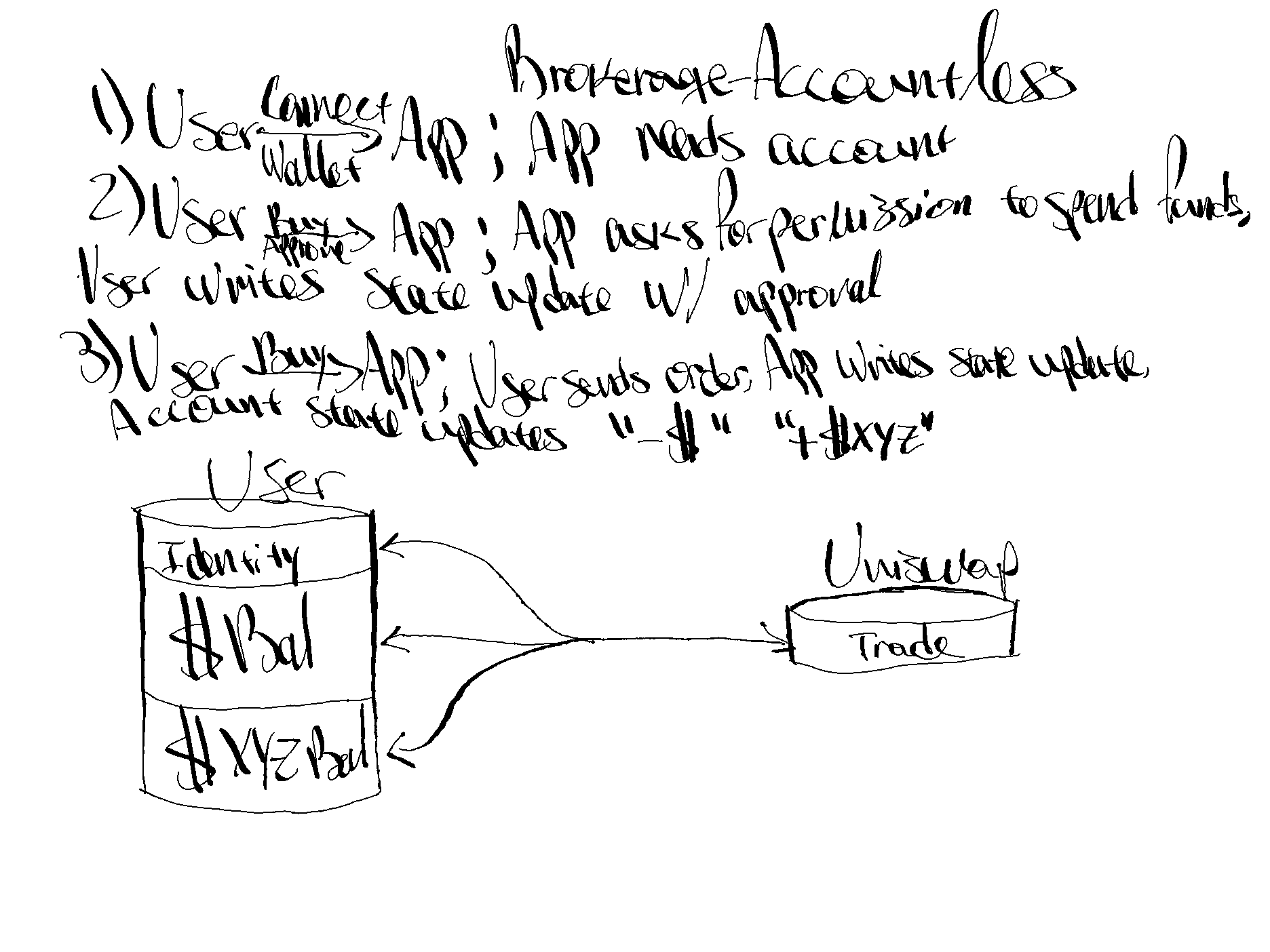 So we talked about value, but what about information? How would that type of case work? Let’s start with how things work today, the accountful paradigm. I find an app I like, and I want to use it. Say it’s Twitter. I’m asked to sign up for an account, I use my email and now my sign-up action makes a write to the app’s database. I log in, inputting my newfound credentials & my input is checked against the database, it matches, great, now we’re in. Once logged in, the app shows me a feed. Let’s treat this as part of the service the app performs. The feed is compiled from previous writes made to the database, the feed I see is assembled by reading the subset of entries made by the accounts I follow. If I were to tweet, that would be another write to the database, perhaps an append to my already existing series of tweets. Once again everything other than my email lives inside of the app, my account, my own and others tweets, all of this information is held within.

In the accountless paradigm there would be no sign up. The app will ask me to connect my wallet, a substitute for making an account for the app. The app could permit me to make a pseudonym/public username associated with my wallet. If I were to tweet, the tweet would be writing a state update tied to my account. Every write creates a new entry ‘held within’ the account in no different fashion than how the account would hold assets. What about the feed? The app could assemble a floating database by reading all accounts that have chosen to connect to it, only displaying a feed of connected wallets. The feed I see would be the subset of connected wallets I chose to follow. When I connect my wallet the app can inquire about the length of the session I want to have. Think of this as pre-defining my desired screen time. This would act as pre-approval for the session such that I wouldn’t have to approve each time I wanted to post. This may not seem so different, and while the difference may be subtle, it’s certainly there. With the information of my posts held within the account I could leave the app the moment I’m no longer happy with its service. I no longer have to fear losing everything I’ve put into it, because an accountless app doesn’t own my information. An accountless app merely arranges it. In this sense applications become more like media players, and our information or value are the media. We pick the player we like best and we insert our media. We come to the app for the service. If the service is no longer appealing we can move to another. If the service shuts down, we may be disappointed, but we haven’t lost anything.

Why do I think this is so cool? Perhaps I’m over stating it, but I think there’s something magical about moving the information that previously lived within the confines of distinct apps into the account that created was the ultimate source for it. It’s not just about the control or sovereignty you could have over your information. It’s about all the things we can’t even imagine doing now but will be enabled by this shift in architecture. But to keep things in perspective here’s one thing that doesn’t seem so far out on the horizon that we couldn’t even imagine it today, and that’s messaging. Think of the Twitter example above, what’s really happening there? Messages are posted by users, and each message is written to the account instead of updating the app’s internal and siloed database. The app reads every connected account to display a feed. It’s already passing some information between these accounts, a form of messaging that resembles text or email is not too far away. You could create messages that are only readable by another account you specify. The message is written to your account with the specification it can only be viewed by another account, and in this case the app in question allows the other account to view it once connected. You could specify individual or group messages. Group messages could be designated via a shared account that is accessible by the individual accounts of everyone in the group. With all messages being tied to the account of the sender you could have better control than ever before. Who hasn’t sent an email they wish they could immediately undo? You clicked send and off the message went, into the ether on its way to the destination. While some messengers allow you to delete or edit a message after it has been sent, you have limited certainty about who else has that capability. When it comes to email, no major clients provide this capability. In an accountless architecture no messaging application would face a problem like this as every message is held within the account, viewable only by the recipients.

It’s time to rethink how applications are built. Why shouldn’t they be accountless? We should they be accountful? Why should they own your account, and by extension all of the information and value tied to or created by it? The most important question is why should we continue to build applications the same way we have until now? While it’s true that it’s still so early that it’s hard to picture the things uniquely enabled by the accountless internet, it’s not impossible. The things not possible in an accountful paradigm are not impossible to imagine. I’m going to make my best effort to do just that. To attempt and imagine them, and hopefully help manifest them into existence.